8729 Toa Nuparu is a BIONICLE set released in 2006. He is one of the six Toa Inika. He is armed with a Zamor Sphere Launcher on his shoulder, a Laser Drill, and two Great Claws on each hand. The reason for having his Zamor Sphere Launcher on his shoulder rather than in one hand is probably because his Laser Drill is too heavy to hold with one hand. He wears the Kadin, the Great Mask of Flight. In the BIONICLE storyline, he is a Toa of Earth who loves technology of all sorts. Despite being a Toa of Earth he loved to fly. This is Nuparu's second appearance in a set, and the first set where he was featured by himself. He was transformed into a Toa by a bolt of lightning from the Red Star. It has 55 pieces. 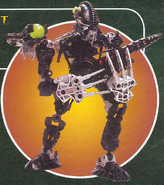 Nuparu Instruction
Add a photo to this gallery

Retrieved from "https://lego.fandom.com/wiki/8729_Toa_Nuparu?oldid=1921111"
Community content is available under CC-BY-SA unless otherwise noted.