8581 Kopeke is a BIONICLE set released in 2003. He was one of the six Matoran released that year that wasn't included with a Rahi. Like the rest of those Matoran, he comes with a Kolhii Stick and a Kolhii ball. 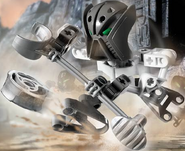 Retrieved from "https://lego.fandom.com/wiki/8581_Kopeke?oldid=1836150"
Community content is available under CC-BY-SA unless otherwise noted.