8117 Storm Lasher is an Exo-Force-themed set released in December 2007. It includes 275 pieces and a minifigure, an Iron Drone.

The set includes a mini-robot that looks like a dragonfly that can be easily attached to the back of the Storm Lasher. The Storm Lasher is piloted by an Iron Drone. It has two fan propellers made of six swords each that are also used in some Castle sets and one gun is attached to each of the propeller guards. The propeller fans also have black and yellow/green colour themes. In front of the cockpit there are two four-barreled guns, two rockets and a pair of claws. The set measures 7" (18 cm) long and 12" (30 cm) wide. 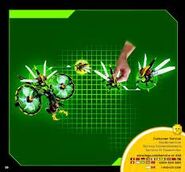 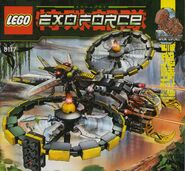 The box art
Add a photo to this gallery

Retrieved from "https://lego.fandom.com/wiki/8117_Storm_Lasher?oldid=1589591"
Community content is available under CC-BY-SA unless otherwise noted.