Like all of Batman's other vehicles, the Batboat is Black. It is depicted as a hovercraft. There is a small area in the back for a small jet ski, or even Killer Croc's speedboat.

Killer Croc's speedboat is much smaller than the Batboat and uses exclusive printed Crocodile wedge pieces. It is mostly Dark Stone Grey and Reddish Brown. 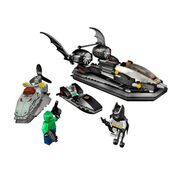 Retrieved from "https://lego.fandom.com/wiki/7780_The_Batboat:_Hunt_for_Killer_Croc?oldid=1909832"
Community content is available under CC-BY-SA unless otherwise noted.