7703 Fire Vulture is an Exo-Force set released in 2006. It includes a Devastator minifigure.

Like most 2006 Exo-Force sets, the battle machine is equipped with a light-up brick and fiber-optic cable to "power up" with.

The basic build is the same as the other large battle machines, mainly using a SNOT technique. The body is built using a main "bar" which connects to the legs. Four TECHNIC pieces used as levers connect this bar, which the power core connects to, to the sides of the body, which can hinge up and down slightly. When the outer section is pulled downwards, the power core will light up and send the red light down the fiber-optic cable it is connected to.

The Vulture has a flame shooter on its right arm, which the power cord connects to. The gun can be tilted laterally, but not vertically. The arms are built with the same types of bricks as the large knights from Knights' Kingdom II. For the armour on the upper arms and legs, it has two bricks, one dark blue and one light blue, with a dark blue 1x2x1/3 brick under the dark blue one so that they overlap. There are blue stickers on the dark blue parts of the arms.

The cockpit is built using a dark grey horse harness, which the Devastator sits behind. On the sides of the body, there are dark blue pieces with stickers. The right side has a picture of a robot, and the other side has something which looks like a circuit-board. On the left shoulder, there is a gun built out of a machine gun with two studs on it, a transparent red one and a solid light grey one. The other side has a loudspeaker with a red cone.

On the back of the body, connected to one of the TECHNIC bricks that hold the body together, there is a turbofan. It can hinge back and forward.

The Fire Vulture was a battle machine mass-produced by the robots. It had the ability to fly and it wielded a flamethrower and electro vulture claw. Hikaru particularly had trouble with Fire Vultures and had many skirmishes with them. 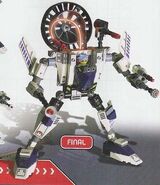 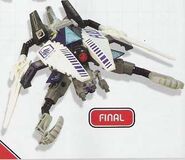 The box art
Add a photo to this gallery

Retrieved from "https://lego.fandom.com/wiki/7703_Fire_Vulture?oldid=1955469"
Community content is available under CC-BY-SA unless otherwise noted.