The Ultra-Drill Walker features a large drill mounted on the top, with a blunt shooter for defense. The cockpit can be removed, allowing the drill to point down, as it would when drilling for Energy Crystals. The drill can be turned with a small gear on the side. The cockpit also features a small vehicle which can come out of the back, though there are not enough minifigures included in the set to have all the vehicles driven at once.

The alien ship is black and green, and has four "lasers" on it for combat, though these have no function in the set. It has room for an included Alien Commander.

Description from The LEGO Book 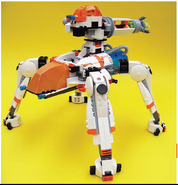 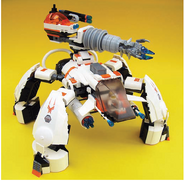 Retrieved from "https://lego.fandom.com/wiki/7649_MT-201_Ultra-Drill_Walker?oldid=1628924"
Community content is available under CC-BY-SA unless otherwise noted.