The set showcases a large black "bat-sub" for Batman. It has flick missiles, a fin on the back, and a possible hidden feature. Also included is Black Manta's ship. It looks like a manta fish, with a red cockpit for Manta. It also appears to have the newly introduced red shooters. Along with Manta, the set has a "robo-shark." It is black and gray, with dual gray shooters. The final piece is the Atlantean entrance. It has a golden trident above it, with detail of sea vegetation. It seems to have a place where Scuba Robin can hang from.

The set depicts a scene in which Black Manta, Aquaman's main foe, has captured "The Sacred Trident of Poseidon" and Robin. Batman in his submarine has come to help Aquaman in the task of retaking the trident and rescuing Robin. 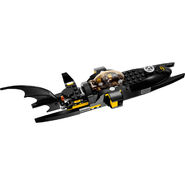