76016 Spider-Helicopter Rescue is a Marvel Super Heroes set released in 2014.

The Spider-Helicopter is the same helicopter used by Spider-Man in the video game LEGO Marvel Super Heroes. It is built with red, blue, and various shades of grey. There is a main rotor on the top of the copter, along with two jet-fans on both sides of the vehicle. There are two cockpits present, similar to 6869 Quinjet Aerial Battle, the main cockpit, where Power Man maneuvers the copter, and another cockpit, which has no floor or a removable floor that can connect to Spider-Man's web to hang off of.. Also, the copter features a set of flick-fire missiles triggered by a mechanism located behind them, and on the other side of the copter there is a similar mechanism that launches a net towards Green Goblin and his glider.

Green Goblin's Goblin Glider is built with dark and light grey, black, and transparent and light green bricks. It features a main platform for Green Goblin to stand on with two identical wings on each side of it. Also, it seems that it as well features flick-fire missiles on the wings. 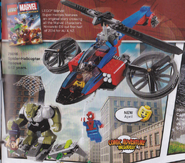 The set in a catalogue 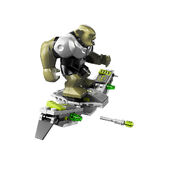 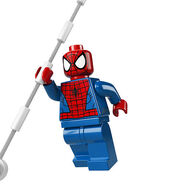 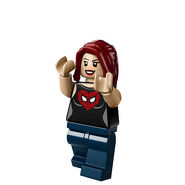 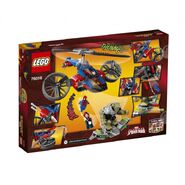