The F40 Competizione is a non-sponsored, more powerful version of the F40 LM, which was the result of consumer requests following the order of a French importer who wanted to enter one in the 24 Hours of Le Mans. 10 examples were built, all at customer request, the first two being called F40 LM's, and the remaining 8 being F40 Competizione, as Ferrari felt that the LM tag was too restrictive. 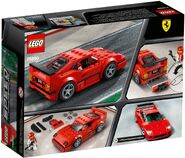