75211 Imperial TIE Fighter is a Star Wars set released in 2018 under the Solo: A Star Wars Story subtheme.

The set contains 519 pieces and four minifigures, and is very similar to previous versions of the TIE. It is in the black and light gray colors, and has two stud blasters under the cockpit that serve as laser cannons. The cockpit is able to open, and there are multiple accessories included.

TIE/ln starfighters were the dominant Imperial starfighter during the Galactic Civil War, serving throughout almost the entirety of the Imperial Era and beyond. It was the Empire's most iconic ship, and was generally used as cannon fodder against enemies. Multiple TIE Fighters fought during the Mimban campaign, in which the Empire fought the local Mimbanese Liberation Army in a protracted and bloody war. 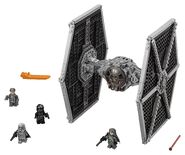 Retrieved from "https://lego.fandom.com/wiki/75211_Imperial_TIE_Fighter?oldid=1963702"
Community content is available under CC-BY-SA unless otherwise noted.