The set consists of three main parts, which are Luke Skywalker's Rebel Snowspeeder, a small P-Tower Turret on a small baseplate with a command post on the side, and another part which consists of three baseplates. The set also includes a Imperial speeder and a small turret. It contains 6 minifigures, a Tauntaun and an Imperial Probe Droid.

The Snowspeeder has a design similar to the one from 8089 Hoth Wampa Cave, but with small differences. Some of them are that the orange details are replaced by grey ones. It has a turret on both sides, and a cockpit, which Luke can fit in with his lightsaber. There is a small Alien Conquest gun with binoculars attached to it on the back of the Snowspeeder.

The P-Tower Turret is entirely light bluish grey and dark bluish grey and can rotate. Next to it, is a small command post where General Rieekan can sit. The antenna is made by using a fencing foil.

The other part consists of three small baseplates, each one with different accessories. The first one has a small box and another small accessory, the second one has a pickaxe and a shovel, and the third one has a small rotatable turret.

The speeder and turret

The Battle of Hoth was a major victory for the Galactic Empire and the single worst battlefield defeat suffered by the Alliance to Restore the Republic during the Galactic Civil War. The battle was an Imperial invasion aimed at destroying the Rebel Alliance's Echo Base hidden on the remote ice world Hoth. The base's location was compromised when a Imperial Probe Droid deployed by Darth Vader landed on Hoth. As the Rebels had been trapped, they suffered huge losses, including most personnel, most defenses including the base, most infantry, some starfighters, and over half of the transports. However, some of the Rebels managed to escape. 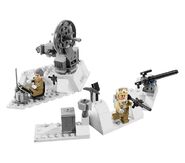 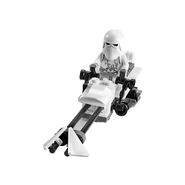 The speeder
Add a photo to this gallery

Retrieved from "https://lego.fandom.com/wiki/75014_Battle_of_Hoth?oldid=1910865"
Community content is available under CC-BY-SA unless otherwise noted.