The Police Station contains two main builds. One of which is a two story construction including two garages with sliding doors and two jail cells featuring out-folding walls and beds containing hidden crowbars. The other build is a three story office building consisting of a lobby, inmate screening room and an office room at the top. There is also a helipad on the roof which the 7741 Police Helicopter fits onto. The set also includes three vehicles - a Police van with room for a minifigure lying down inside, a Police squad car and Police bicycle.

The set includes six minfigures: two Policemen, a Policewoman, a Detective and two criminals as well as a Police dog. 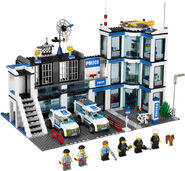 Retrieved from "https://lego.fandom.com/wiki/7498_Police_Station?oldid=1941557"
Community content is available under CC-BY-SA unless otherwise noted.