7235 Police Motorcycle is a City set released in 2005, and later re-released in 2008 with blue stickers. It contains a Police motorcycle with lights and an antenna and a police officer.

The Police motorcycle consists of a standard black bike frame with a stylized white piece that covers it and changes the appearance. Various accessories are placed on the covering. This gives the effect of a broad front section with a yellow light in the center two blue lights are located on each side, with a sticker reading Police in between them. The back of the motorcycle has the same sticker on each side. Clipped onto the piece just behind the driver is a grey walkie-talkie. two red lights are next to it. The minifigure has standard police officer printing and wears a white helmet with a transparent visor.

On variations of the set, the sticker reading "police" has been either earth green or light blue. 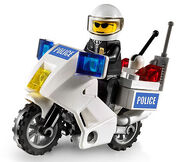 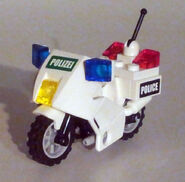 Retrieved from "https://lego.fandom.com/wiki/7235_Police_Motorcycle?oldid=1955519"
Community content is available under CC-BY-SA unless otherwise noted.