7065 Alien Mothership is an Alien Conquest set released in May 2011. The set includes 416 pieces and is intended for children ages eight through fourteen.

Alien Mothership: Part of the alien mothership's main structure is a large ring built from the smaller versions of the train tracks first found in the Indiana Jones set, 7199 The Temple of Doom.[1] The ring is rotated around in circles, and a sound block emits an alien-like abduction sound. On the bottom, there is an extending abduction claw. It also has transparent 1x4 flat tiles inside the ring forming "lights", slopes in the centre of the ring, and transparent grilles on the outside of the ring. There are four positionable lasers spaced around the ring. Four long tiles reach to the cockpit at the centre. The cockpit features an opening and closing glass,[2] and has enough room to seat the Alien Commander.

The Alien Commander having caught the News Reporter

An Alien Clinger clinging to the News Reporter's head

The Alien Mothership piloted by the Alien Commander 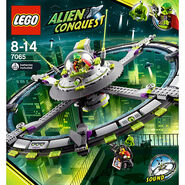 Instruction art
Add a photo to this gallery