70653 Firstbourne is a Ninjago: Masters of Spinjitzu set to be released in 2018.

The Firstbourne, as its name implies, is thought to be the first of all dragons and mother to subsequent generations of the species.

In the second episode of Tales from the Monastery of Spinjitzu, the Firstbourne appears alongside various other dragons to welcome the Ultra Dragon when it returns to the First Realm.

In "March of the Oni", the Firstbourne-ridden by Faith-attempts to fight off an Oni attack against the former Dragon Hunters. When the Hunters and its fellow Dragons are all subdued, it travels to Ninjago with Faith. It collapses at the foot of the Monastery of Spinjitzu's mountain peak, and Wu and the Ninja rush to check on it. Later, after the defeat of the Oni, the recovered Firstbourne flies in the air above the monastery. 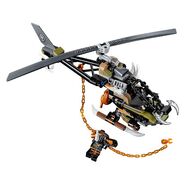 Firstbourne art
Add a photo to this gallery

Retrieved from "https://lego.fandom.com/wiki/70653_Firstbourne?oldid=1953265"
Community content is available under CC-BY-SA unless otherwise noted.