70006 Cragger’s Command Ship is a Legends of Chima set released in 2013. This set includes six minifigures, a large Crocodile Tribe warship, and two smaller boats for the Lion Tribe. It has 609 pieces.

The Command Ship is a gigantic warship belonging to the Crocodile Tribe. It takes the appearance of a large crocodile with a very fat body, a short tail, and a large collection of spikes bristling all over its plastic base. The back legs serve as propellers, pushing the boat through its swampy home, and the front legs are clawed, with smaller, detachable boats on top of them. Between the controls and the front of the ship, there is a small lowered deck with a small weapons cache. The front of the warship resembles the head of a crocodile, with large red eyes opening to form hideaways, multiple jagged teeth, and a long spiked nose. The back of the ship (including the tail), is the helicroctor, a detaching flight machine manned by Rawzom. It has 2 flick fire missiles and 2 silver laser swords on each side. Just in front of the tail, there is a swiveling blaster turret behind the warship’s controls, and the turret is manned by the golden-helmeted Crominus.

The Lion Jet Skis are identical, manned by Lennox and Leonidas, warriors of the Lion Tribe. They have room for only one figure each, and are made up of prominently yellow and brown parts. Similar to some City jet skis of the same size, the Lion Jet Skis have the typical rounded front of most LEGO-created jet skis. 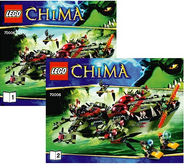 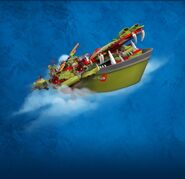 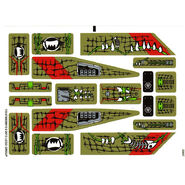 Prototypes of the lions' vehicles

A prototype of the Command Ship