6940 Alien Moon Stalker is a Classic Space set released in 1986. It contains a quadrupedal walker similar to and possibly inspired by the AT-ATs from the Star Wars movies, which were eventually turned into LEGO sets themselves nearly two decades later.

The machine is manned by two Classic Space astronauts (red and blue).

The legs could move back and forth through the use of several 2x2 turntables. A similar mechanism was featured in the set 6882 Walking Astro Grappler. The two front legs contained storage boxes.

Behind the transparent green windows the vehicle's "body" contained two missile silos. Situated at its aft was a small platform where one of the astronauts could operate the flexible gripper arm that composed the "tail". The cockpit and the platform could both be disconnected and connected to a small spaceship. 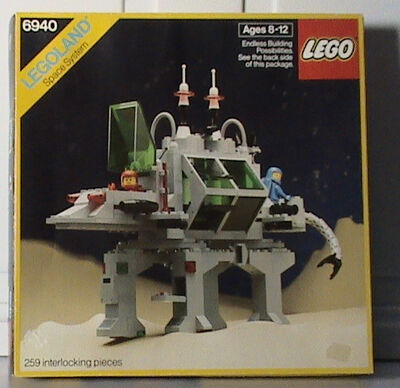 Retrieved from "https://lego.fandom.com/wiki/6940_Alien_Moon_Stalker?oldid=1734283"
Community content is available under CC-BY-SA unless otherwise noted.