With the exception of the minifigures, the entire set is dedicated to Lex Luthor's Kyrptonite mech. The mech is primarily green, but also has grey, purple, and transparent yellow-green as part of the colour scheme. The mech has a humanoid design, but without a head. A transparent hose, with green contents, attaches from two glass cases on the mech's shoulder (where it seems as though Kryptonite is being held) to a ray gun held in the robot's right hand. The other hand has no weapons, but seems to be for holding prisoners, as Wonder Woman is shown as being trapped by it in pictures. On the mech's chest is the cockpit for Lex Luthor, which is protected by a bubble-like wind-shield.

This set is based on no specific scene from the Superman or Wonder Woman franchises, but according to the set description, it seems as though Lex Luthor has built a mech with a Kryptonite gun, captured Wonder Woman, and Superman has come to her rescue.

In the included comic, Superman comes to save Wonder Woman from Lex Luthor who has kidnapped her in his mech. Superman tries to use his heat vision to deconstruct the robot but Lex puts Wonder Woman in front and she takes the blast. Lex shoots Superman with the Kryptonite gun and Superman falls to the ground. He gets up and throws a piece of the pavement at the robot, flies towards Lex, and hits the mech, freeing Wonder Woman. She escapes the claw with the gun and Superman catches it. The pair fire it at the mech. The mech gets destroyed, but Lex jumps out and runs away. Wonder Woman takes out her Lasso of Truth and the end is left open. 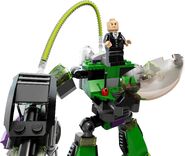 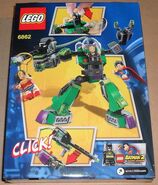