6241 Loot Island is a 2009 Pirates set containing a small island owned by the Pirates and a row-boat for an Imperial Guard, which has a pull-back cannon attached to it. A crocodile is also included. The minifigures are one Pirate, one castaway and one Imperial Guard. This set was featured on the back of a LEGO filming set, as an example of what to film. 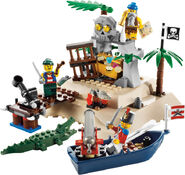 Another view of the set in its entirety

The minifigures
Add a photo to this gallery

Retrieved from "https://lego.fandom.com/wiki/6241_Loot_Island?oldid=1641189"
Community content is available under CC-BY-SA unless otherwise noted.