Bulk retains his orange secondary colour in Breakout, with a total of five major pieces coloured orange. The other armour pieces are an assortment of silver and dark silver, and two large armour pieces protect the sides of his head, similar to that of 4528 Green Lantern. However, his feet are black, and though they do not contradict the colour style of his armour, there are no black armour pieces included. On his lower legs, he sports two of the new armour pieces that fit over the ones introduced in Ordeal of Fire. Bulk's left arm is shorter than his right, reminiscent of Rocka's crossbow arm, and he wields a plasma gun with a green plasma sphere. Over his right shoulder, a shield with missiles lurks, which can turn around to the back. The symbols on Bulk's body armour are golden, indicative of different styles of gears and suchlike.

Dunkan Bulk is a member of the Alpha 1 team led by Stormer, and while he is not the brightest bolt in the bucket, he is incredibly strong and is a machine of destruction. In Breakout, he was assigned to hunt down Core Hunter, who lurked in Makuhero City. 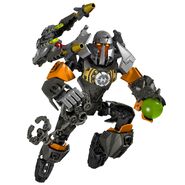 Add a photo to this gallery
Retrieved from "https://lego.fandom.com/wiki/6223_Bulk?oldid=1679744"
Community content is available under CC-BY-SA unless otherwise noted.