Julius Nex has three main colours in Breakout; orange, white, and gunmetal. He uses a plasma blaster with a green sphere in his right hand, and a precision laser cutter, made up of a transparent green aerial, a cord, and a large shield piece. On his left shoulder, he wears a large armour piece, and on his right, a harpoon gun serving as an aerial looms. His handcuffs connect to his right thigh. His body armour is white, and the images on his chest armour are those of technical wires and things. He is the Hero sent on the mission to capture XT4.

Nex was built in the 2.0 upgrade, and carried on through the 3.0 and the Breakout versions. His bio on LEGO.com says that if someone else gets a new ‘toy’ or gadget before him, he is angry. Nex is enthusiastic and exuberant. 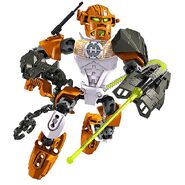 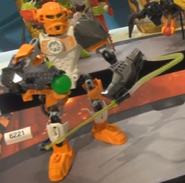 Retrieved from "https://lego.fandom.com/wiki/6221_Nex?oldid=1702850"
Community content is available under CC-BY-SA unless otherwise noted.