B-Wing Fighter is a Classic Star Wars set released in 2006. It included the B-Wing Pilot and Ten Numb Minifigures. It also includes a Service Tower, which acted as a display stand.

The B-Wing Fighter is mostly light- and dark-grey, with several orange stickers. The cockpit opens to seat one minifigure and features some controls. There is one main wing and one S-foil on each side, all of which are mostly light grey and have a circular orange sticker each for decoration. The S-foils open and close so the B-Wing can alter between attack and flight mode respectively. The main wing has a large blaster cannon on the end while each of the S-foils feature a smaller blaster cannon on their tips. The engine is in the centre of the ship and consists mainly of dark grey bricks. Two projectiles can be fired by pulling and releasing a small handle at the back.

The service tower is mostly black and yellow and reaches up most of the length of the main wing. A ladder leads to the platform on top, and at the top there are some tools. The service tower doubles as a display stand.

The B-Wing Fighter fought alongside rebel forces in the Battle of Endor. 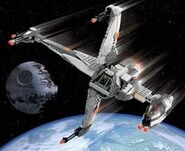 The B-Wing in combat.
Add a photo to this gallery

Retrieved from "https://lego.fandom.com/wiki/6208_B-Wing_Fighter?oldid=1873449"
Community content is available under CC-BY-SA unless otherwise noted.