This set includes 5 minifigures, 2 large transparent green shield pieces, and a few sea animals, including sharks, octopi, and mantarays. The set contains a total of 472 pieces. The set contains 3 Hydronauts and 2 Stingray. There are two vehicles within this set, one being a large Hydronaut submersible-the other being a small Stingray scout craft. The set comes with a raised baseplate, on which the base rests. It contains many yellow and dark-grey pieces, with all of it's translucent pieces being of a dark-greenish colour. It contains many silver pieces, including silver harpoons and crystals. There are Manta Rays, Sharks, and Stingrays swimming around, while a Hydronaut vehicle guards the base. There is a hangar in the base, accessible to the Hydronauts when a button in inside the top section is pushed. There is a sneaky Stingray scout vehicle, similar to set 6107 Recon Ray.

The Hydronauts submarine, which comes with the base, is mostly yellow in colour. It has a dark-green cockpit, with a small amount or black thrown in. It is powered by twin propellers, and on the front are dishes which could be lasers but which could also be sonar devices. It has a carrying cage for crystals. Both of the vehicles have racks for carrying flippers (for diving).

Other sets that contain underwater bases

A picture from the rear page of the instruction booklet.

A catalog page featuring the set. 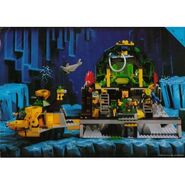 The base from the rear.

Retrieved from "https://lego.fandom.com/wiki/6199_Hydro_Crystallization_Station?oldid=1720683"
Community content is available under CC-BY-SA unless otherwise noted.