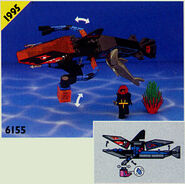 From catalog
Add a photo to this gallery

6155 Deep Sea Predator is a large Aquasharks set. It has two harpoons as weapons, in addition to a magnetic arm and a claw arm. The back part opens up, allowing a magnetic box to be placed inside. The vehicle has one propeller, and is piloted by one Aquashark. It has two flippers on it, in addition to two silver knives on the sides. The set also comes with a bush and a shark.

Retrieved from "https://lego.fandom.com/wiki/6155_Deep_Sea_Predator_/_Aquashark_Barracuda?oldid=1594355"
Community content is available under CC-BY-SA unless otherwise noted.