6073 Knight's Castle is a Castle Black Falcons set released in 1984. It contained a castle, two horses and six Minifigures, including two archers, two guards and two knights on horseback. This was the first of two castles of the Falcons, the second one being 6074 Black Falcon's Fortress.

The Knight's Castle was the original stronghold of the faction known today as the Black Falcons. This set was a contemporary of the Crusaders' 6080 King's Castle and mirrored its overall structure albeit being smaller and lacking a proper gatehouse. It was built on a series of separate green plates, rather than large baseplates, and featured a prison cell and a winch to raise and lower the drawbridge. The prison cell was built into the ground floor of the tower at the right and was closed by a thick black brick-built door attached with hinged bricks, rather than utilizing a one-piece door element. It was manned by two mounted knights, two spear-carrying guards, and two archers.

The castle could also be opened up, allowing access to the interior. 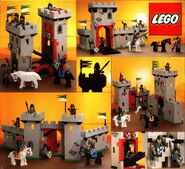 Alternative builds
Add a photo to this gallery

Retrieved from "https://lego.fandom.com/wiki/6073_Knight%27s_Castle?oldid=1964112"
Community content is available under CC-BY-SA unless otherwise noted.