6030 Catapult is a Castle set released in 1984. The set contains a catapult, rocks, and two Black Falcons soldiers. The soldiers are equipped with a sword, spear and two shields. 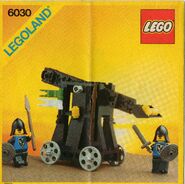 Alternative builds
Add a photo to this gallery

Retrieved from "https://lego.fandom.com/wiki/6030_Catapult?oldid=1964104"
Community content is available under CC-BY-SA unless otherwise noted.