It consists of a hydroplane with flick-fire tranquilizer missiles, a net to drop and two spinning propellers. If you push the button in front of the missile, the net drops out of the plane's bottom. It also has a small motorboat that can connect to the rear of the Ocean Interceptor. It includes two minifigures, and a Pteranodon. 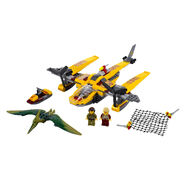 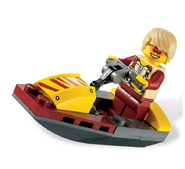 Retrieved from "https://lego.fandom.com/wiki/5888_Ocean_Interceptor?oldid=1596681"
Community content is available under CC-BY-SA unless otherwise noted.