5884 Raptor Chase is a Dino set released in early 2012. It includes a medium sized jeep that seats two minifigures, a Raptor, and an outpost with several spikes and fences. The jeep has spikes, movable ladders, a rotating positionable arm with a lasso, two tranquilizer flick missiles and seats for two minifigures. On the outpost is a computer and a crate with several tools. Beside it is a radar and antenna. The outpost is disguised with several plants and leaves. Accessories include two tranquilizer guns, a wrench, a hatchet, a crowbar, binoculars, and a turkey leg. 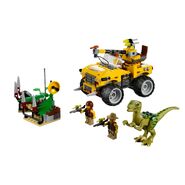 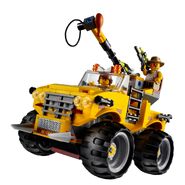 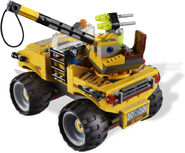 Retrieved from "https://lego.fandom.com/wiki/5884_Raptor_Chase?oldid=1409640"
Community content is available under CC-BY-SA unless otherwise noted.