4866 The Knight Bus is a Harry Potter set released on June 1, 2011.[1] It recreates the scene in Harry Potter and the Prisoner of Azkaban in which Harry Potter is rescued by the Knight Bus, a transport for a stranded witch or wizard, after fleeing Number 4 Privet Drive after accidentally inflating his Aunt Marge. The set is a remake of the earlier set 4755 Knight Bus, and has noticeable improvements and added detail to the original incarnation of the scene. The set costs $34.99 and includes the minifigures Harry Potter, Stan Shunpike, and Ernie Prang. Also included is Harry's owl Hedwig and a printed cylindrical piece to represent the Shrunken Head.

The bus is based of the vehicle from the Harry Potter series. The Knight Bus is a purple triple decker bus. Inside, it has a removable bed which slides back and forth when the bus moves as it is not connected via studs. A chandelier loosely hangs from the roof of the bus and reaches down to the bottom floor where it swings like a pendulum. The upper two levels each contain two brown seats for passengers. The back of the bus is open with a footplate for the conductor, Stan Shunpike. The front has a spot for the driver, Ernie Prang with a blue steering wheel. The set includes Hedwig, a Shrunken Head, and a chest with two tan tiles printed with grey socks as accessories.

Differences from the Original

Unlike the original there are seats in the bus. The shrunken head is a cylindrical brick, and no longer printed on the windshield. The roof is much flatter and different types of wheels are used, meaning that the bus isn't as tall as it was before. This set also does not include The Grim, a street light, or a bush as the old one did.

The minifigures included in this set are Harry Potter, Stan Shunpike, and Ernie Prang. Both Harry and Stan are remakes, and this particular version of the Stan minifigure is exclusive to this set. Ernie is also exclusive. The Shrunken Head is also included in this set, but is cylindrical piece with a design printed on it and is thus not truly a minifigure. However, it is sometimes counted as one, such as on the LEGO Harry Potter website Characters page. 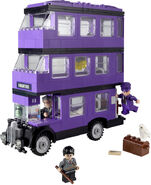 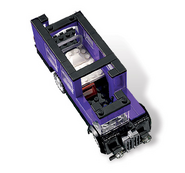 An other Alternate view. 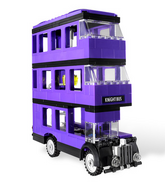 An other Alternate view.

Advertisement for The Knight Bus on LEGO Shop.com.
Add a photo to this gallery

Retrieved from "https://lego.fandom.com/wiki/4866_The_Knight_Bus?oldid=1727412"
Community content is available under CC-BY-SA unless otherwise noted.