4433 Dirt Bike Transporter is a City set that was released in late 2011. It includes a truck, a trailer that can hold two dirt bikes, and many accesories. It comes with two drivers.

The 4433 Dirt Bike Transporter is a Forest set that includes a 4wd truck and a trailer with two dirt bikes. The truck includes headlights, KC lights and a checkered pattern on the roof, and an extra dirt bike tire on top. It can seat two minifigures. The trailer can hold two dirt bikes, and also has a compartments for accessories, including two helmets, repair tools and fire extinguishers. The set also comes with two dirt bikes, one green and one orange, two cones with flags, and two riders/mechanics. 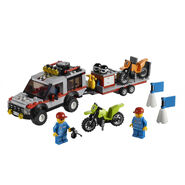 Set in it's entirety 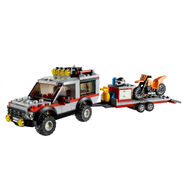 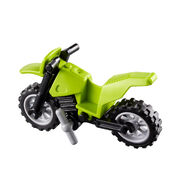 One of the dirt bikes
Add a photo to this gallery

Retrieved from "https://lego.fandom.com/wiki/4433_Dirt_Bike_Transporter?oldid=1856070"
Community content is available under CC-BY-SA unless otherwise noted.