41635 Wyldstyle is a BrickHeadz The Lego Movie 2 set released in 2019 as a Walmart exclusive.

Wyldstyle was one of the Master Builders who help Emmet save the LEGO realms from Lord Business, who intends to use a powerful relic called "The Kragle" to glue everything where it stands. Her real name is later revealed to be "Lucy". At the end of the feature, she becomes Emmet's girlfriend and they hold hands. Emmet and his friends then witness the arrival of the DUPLO Invaders. 5 years after the DUPLO attack, Lucy and the rest of the civilians of Bricksburg were affected by the change, with the exception of her boyfriend Emmet, who's pretends that everything is still awesome, despite saying not everything it is. Emmet tells Lucy he has some dreams about "Armageddon", in which involves some of characters later presented in the film and the all LEGO World being sucked by a giant hole. Although, Emmet wants to rebuild the future by making a house to both of them. After a tour in a new house build by Emmet, Lucy is worried that the house might be destroyed and the fact that Emmet still believes everything is awesome. She asks him to promise to grow up so he can adapt to this modern times. Emmet promises he will try.

When Emmet sees a shooting star, is actually revealed to be a spaceship for other planet, and Wyldstyle seeing this whit giant glasses, questions why is here. The alien is revealed with the name of Sweet Mayhem, and takes her and his friends (Batman, MetalBeard, Unikitty and Benny) into her ship. In the Systar System, they met Queen Watevra Wa'nabi, and she manages to change the other master builders, but Lucy knows something's up with Queen What'evra Wa'nabi and her plans. After a forced spa in Planet Sparkles, Lucy gets revealed her original color hair, which is blue and pink made of candy. She tells she was unsure of herself and she dye her hair hair using a black marker. Lucy was later set to being "brainwashed" with Catchy Song, but she managed to escape despite seeing her friends "brainwashed".

Once they escape for the Duplo Brickyard, she is reunited with Emmet and they embrace, but no so much when she meets Rex Dangervest. Rex tells Emmet has managed to have his own abilities and force by making him tough. Despite Emmet's joy of this by impressing her, Lucy is sort of disappointed by this. They make up a plan which involves switching off the pop music that is brainwashing the others, while Emmet will destroy the reception cake encased in a temple to stop the wedding between Batman and Queen What'evra Wa'nabi. However, Rex and Emmet are shocked when Lucy reveals her original hair to them, and she affirms she is not brainwashed. Despite Rex warnings, Emmet believes is the real Lucy because he trusts her, and she helps them to the plan.

As Lucy fights Sweet Mayhem to get to the music and saves her after almost falling and revealing her own face and personality, she learns the true nature of Sweet Mayhem and that the Systar System never meant to be antagonistic to Apocalypseburg, but instead were trying to establish peace between them, and simply failed at communicating this well. And all of that started when Emmet made that heart to the aliens which is actually Queen What'evra Wa'nabi. Lucy also discovers her friends are not brainwashed, but rather enjoying the Systar System. Sorry for wanting Emmet to change, Lucy tries to prevent him from destroying the temple, but Emmet, facilitated by Rex's manipulations, destroys the temple anyway, believing that Lucy was brainwashed (As she makes sure is the real her and she still likes his song) and the fact that the real Lucy would never like Everything is Awesome, leaving her heartbroken. This creates a hole in the LEGO universe, and Queen What'evra Wa'Nabi warns them that everything Armageddon has on all of them.

Lucy somehow gets in the Real World, when she sees the act of destroying the temple is represented by Finn angrily destroying Bianca's LEGO creations, and discovering Finn's is actually Emmet's behavior. The mother gets furious and orders them to put the LEGOs into storage, leaving Lucy and the others in the box. Thinking everything is lost, she encourages the others by singing and they finally escapes from the storage bin, and brings them back into the LEGO world with Finn freeing all of them.

While Emmet and Rex fights behind the clothes dryer in the real world, Lucy reunites with Emmet, and manages to trick Rex into punching a cute sentient heart, triggering an explosion, destroying his time machine and Rex topples in defeat. Lucy then tells Rex that Emmet will not become like him but he can be like Emmet as they ask him to join them, but Rex denies since he realizes that Emmet being saved by Lucy means he didn't ended up becoming him, erasing his timeline and causing the deluded time-traveler to begin disappearing limb by limb. As he fades away, she thanks Lucy for saving both him and Emmet. After that, Emmet and Lucy apologized to each other for what they have done, declaring to each other being Special Best Friends forever. 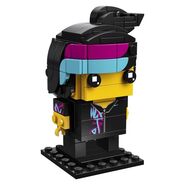 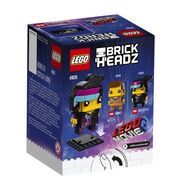 Back of box
Add a photo to this gallery