Flain is the leader of Infernites, the fire tribe that lives in Magma Wastelands. He is the smartest Mixel. He can get crazy when he is under pressure so his brain almost explodes.

Flain on display at Comic-Con 2013 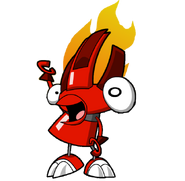 Mixed with Teslo in TV series
Add a photo to this gallery
view · talk · edit Mixels sets
Retrieved from "https://lego.fandom.com/wiki/41500_Flain?oldid=1931219"
Community content is available under CC-BY-SA unless otherwise noted.