A two story yellow cottage with a red staircase leading from the outside to the second storey is the major feature of this set. There's a red curved door at the bottom floor with two circle windows on each side of it, under each of the window's are stickers of flowers. Inside the first storey on the left wall there's a sticker of a green grandfather clock. Above the window on the left theres a balcony, the balcony has blue fencing , on the balcony theres a blue umbrella or parasol, connected too a red table, beside this theres a red door. Above the window on the left theres another window with a unique flower sticker under that, above it theres a blue roof with a red chimney. Also included is a green tree with some holes in it, and a red table with red chairs. The set includes two Fabuland Figures;

Cathy Cat has a white cat head, with a black nose and black whiskers, pointy ears, a bit of hair, black eyes with white pupils and eyelashes. She has a grey neck, white torso with red arms and legs.

Morty Mouse has a grey mouse head, with white teeth, grey nose with black whiskers, huge ears and a bit of hair, his eyes are black with two white pupils. He has a blue torso with black arms and black legs.

Morty Mouse and Cathy Cat have fun at their cottage. 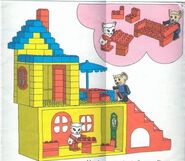 Retrieved from "https://lego.fandom.com/wiki/341_Cathy_Cat%27s_%26_Morty_Mouse%27s_Cottage?oldid=1639860"
Community content is available under CC-BY-SA unless otherwise noted.