This set depicts a decorated room with a fireplace. The building is built on a 8x8x1/3 light grey baseplate. Above this are light sand bricks for the carpet, but with a few dark sand pieces to create a pattern. A layer of white brick around two of the edges of the dark grey baseplate are the stat of the walls. Above these white bricks are seven layers of maroon bricks, on which hand a christmas wreath and a 2x2 flat plate depicting a picture of a boat, like the one in 4193 The London Escape. Above the maroon bricks are some flat white bricks. In the corner of the two walls is a decorated fireplace. There is a fire guard at the front, and at least one orange brick inside it. Two small bark grey walls outline the fireplace, and then there is a curved dark green 4x4 brick, which is the tip of the fireplace. Above this is a red-and-black chimney built out of 2x1x1 bricks. Also on the dark green brick is a gold cup with a stud at the top, and some green bricks and red studs depicting some christmas decorations. Outside of the fireplace, there is a small table with a transparent white mug, and a cookie, and also a firebox with small logs in it. The set includes one minifigure: a Santa with the same face as the Lion King from Kingdoms. 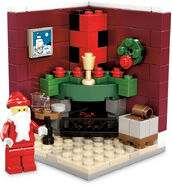 Retrieved from "https://lego.fandom.com/wiki/3300002_Holiday_Set_2_of_2?oldid=1833124"
Community content is available under CC-BY-SA unless otherwise noted.