3185 Summer Riding Camp is a Friends set released in summer 2012. It beats out 3315 Olivia's House as the largest Friends set released to date at 1112 pieces. Summer Riding Camp includes a bathroom, a pasture, a horse cart, an entry gate, a mini-bus, a horse grooming station, a campfire, a large central structure where the visiting campers stay, and various accessories for camping and taking care of horses. In addition to this and the three horses, the set also includes a three horses, Champion, Foxy, and Sunshine, a hedgehog and four Mini-doll figures; Stephanie, Emma, Ella, and Theresa.

An included cart attaches to a horse's back via a dark grey harness piece. The cart itself has brown wheels and a seat coloured both pink and yellow.

The light blue mini-bus has yellowing seating. The upper half and hightlights are coloured white. It tows a cart that holds a chest with the girls' hair accessories.

The construction of the camp begins with two 4x4 lime green plates both with brown crates in the middle. The crates store the girls' riding helmets, a whip, and a pitchfork. Official images show these at the opening of a white fence in a pentagon shape, but with one side of the shape left open to allow horses to come and go.

A campfire segment is built on a grey baseplate. In the center is an orange campfire with two benches situated around it. A pink bucket to the right holds sticks with marshmallows and four mugs are arranged on the ground.

The gate is black and forms a "u" shape and has two tan pillars on either side each with a stylized image of a white horse and flowers in front. The pillars are topped with dark red slopes.

The horse grooming station is also tan in colour with a blue window that has a white frame in the center. It isn't a building of itself, but rather a wall. On the ground in front of it are areas to keep the horses' sattles, a sink, and an apple. On clips above pink animal care accessories and reigns are held. There is another window, this time in the shape of an upside-down "U" with a white frame above the accessories and a dark red, sloped roof tops the structure.

The bathroom is in a similar style with the tan colouring and red roof, but also has a wall which extends to the sides, though the roof doesn't cover it. It features two rooms with arched doorways partly covered by green doors. One room features a toilet and a vanity while the other has a shower. Plaques above the door differentiate the two.

The main structure is once again built in a similar style to the others, but is now much larger and the red-tiled roof now makes two humps rather than just one. The four rooms and roof sections are modular and can be re-arranged.

The outside of the structure is decorated with yellow flowers. There are two arched entryways which lead into the interior. The door on the left opens into a cafeteria with an area for the girls to sit and purple-padded stools. A counter where campers can choose their food holds sausages and fruit. A red vending machine in the lower right corner hold drinks.

Through the other doorway is a classroom with a chalkboard on one wall and various awards on the other. Two purple benches are placed inbetween in the center of the room.

On the second story are two bedrooms. The one above the cafeteria has green and pink bunk-beds with yellow cushions and pink sheets. There are four blue-shuddered windows in the room, two in the front and one on each of the sides. There is a lime green cabinet in the corner lower-left corner.

The other bedroom has two single beds, this time yellow and lime green with purple sheets and white cushions. Each of the beds is against a wall and an entryway to a balcony overlooking the rest of the camp.

Emma, Ella, and Stephanie go to the summer riding camp in a minibus. First they get washed up in the bathroom and shower, groom and brush the horses, and practice many horse techniques with their instructor, Theresa. [source?] After practicing their techniques they move onto lunch in the canteen and have sausages and croissants, washing them down with soda.[source?] They then go to the classroom and learn about the horses.[source?] Finally, it's off to the campfire to roast marshmallows and tell stories, which is followed by bed-time.[source?] 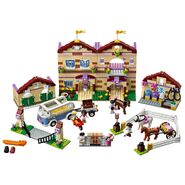 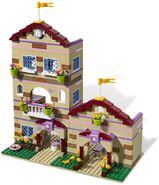 A rear view of the bath-house and main building

Ella, Stephanie, and Emma in one of the bedrooms
Add a photo to this gallery

Retrieved from "https://lego.fandom.com/wiki/3185_Summer_Riding_Camp?oldid=1896854"
Community content is available under CC-BY-SA unless otherwise noted.