Stephanie's aeroplane has white wings. In the center is an area for Stephanie to sit between two yellow slopes which lead back into another seat. There are two more, smaller wings in the back and an azure tail fin decorated with a pink star and white clouds in the back. The front of the plane has a black propeller with three prongs. There are aqua slopes to the sides with pink decorations and an aqua slope backwards with a butterfly. A windshield is in front of Stephanie and the plane has two white and black pontoons for landing gear.

The pier is raised, brown plates extending outwards slightly which a crab rests on. On either side of the entrance to the pier is white fencing and an arch with a bird resembling Goldie connects them. A yellow flag is on the left fence.

The beach hut is a white building with a sloped, pink roof. The front has a window with a counter above palisade bricks. On either side of the window are plates decorated with a pink lifesaver and a chart indicating different members' flying statuses. On the roof is a logo that reads "CLUB" with the same star on Stephanie's plane below it.

Stephanie is a member of Heartlake City's flying club and is trying to earn her diploma for aeroplane flying. 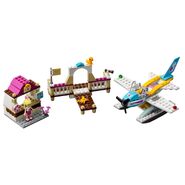 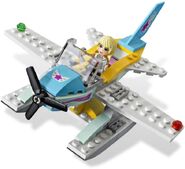 Retrieved from "https://lego.fandom.com/wiki/3063_Heartlake_Flying_Club?oldid=1896850"
Community content is available under CC-BY-SA unless otherwise noted.