30050 Republic Attack Shuttle is a mini LEGO Star Wars The Clone Wars set released in March 2010 as an Easter Promotion in Target stores.

The mini Republic Attack Shuttle has a 4x5 'body' with engines represented by transparent light blue studs at the back and the cockpit at the front. Four sloping pieces are on the four corners of the 'body,' the front ones being maroon while the back ones are white. The the top of the boy is a flat 1x4 piece with a quarter of it jutting out of the back, and a maroon sloping piece at the front. At the sides of the 'body' are some short flag poles with transparent light blue stud 'engines' at the back and red and black control stick 'guns' at the front. The wings, which are connected on by a clip, have a while 2x4 curving piece and a maroon 3x6 piece with a yellow flat 1x1 piece on the maroon piece. The cockpit is mainly maroon with a transparent glass and white 2x3 curving pieces on them.

Republic Attack Shuttles are ships of the republic that are used to transport cargo and passenger. Although they are transport ships, they are heavily armed. 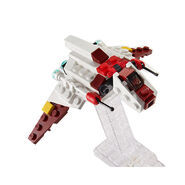 The Shuttle on a stand.
Add a photo to this gallery

Retrieved from "https://lego.fandom.com/wiki/30050_Republic_Attack_Shuttle?oldid=1850858"
Community content is available under CC-BY-SA unless otherwise noted.