2853944 Astronaut is a LEGO Universe set released in 2010. It contains an exclusive Nexus Force Astronaut minifigure, and was sent to customers who pre-ordered the game in October 2010. Each one contained a card with a unique code to enable an in-game version of the astronaut uniform for players to wear. It was packaged in a Polybag. Those who pre-ordered were considered Founders of LEGO Universe. Having this minifigure proved access to LEGO Universe a few weeks before the Official Release. 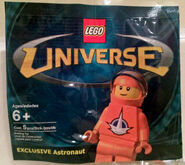 Retrieved from "https://lego.fandom.com/wiki/2853944_Astronaut?oldid=1929991"
Community content is available under CC-BY-SA unless otherwise noted.