1393 Matoro was a small promotional 8 piece BIONICLE set released in September 2001. It was available with a McDonald's Happy Meal.

The set came with six white and sand blue pieces along with a mask that were used to build the character. There was also a disc which could be flung by putting it into the set's hand, pulling it back, and releasing. Matoro became a Toa Inika and Toa Mahri later on in the BIONICLE series. 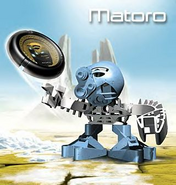 The complete set
Add a photo to this gallery

Retrieved from "https://lego.fandom.com/wiki/1393_Matoro?oldid=1689769"
Community content is available under CC-BY-SA unless otherwise noted.