1390 Maku is a promotional McDonald's Happy Meals 8 piece BIONICLE set that was released in September 2001.

The set came with six blue, medium blue and one Light Grey part along with a mask that was used to build a Matoran called Maku. The set also included a bamboo disk which could be flung by putting it into Maku's hand, pulling it back and releasing. 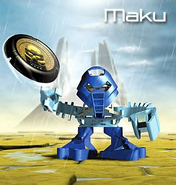 Retrieved from "https://lego.fandom.com/wiki/1390_Maku?oldid=1836149"
Community content is available under CC-BY-SA unless otherwise noted.