10560 Peekaboo Jungle is a DUPLO set released on 2013. It includes 4 brick-built animals and a short story about their fun in the jungle.

It includes 4 brickbuilt animals including a crocodile which is made out of a long green 2x6 flat duplo plate. Two studs in theres a 2x2 green brick with a green eye with black and white pupils and white outlining on each side.

Theres a parrot which has a 2x3 pink brick slanting up at the back, two studs in from the front theres a yellow falt 2x4 plate. At the back of the plate theres a red 4x4 brick on each side in the middle theres a red eye with black and white pupils and white outlining.

Theres a tiger with a 3x2 curved orange brick and a 1x2 orange brick at the back. At the back theres an orange 2x3 brick with printing of black stripes facing down on each side and a orange triangular brick, like the others on on each side in the middle theres an eye, this time it is orange like the others with black and white pupils and white outlining.

The storybook is about the animals hiding from the tiger in the jungle. They hide various spots- the croc in the water, the parrot in a tree and the elephant in tall grass when the tiger is close they say "PEEK A BOO!". 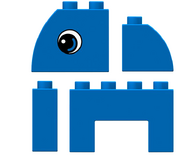 Retrieved from "https://lego.fandom.com/wiki/10560_Peekaboo_Jungle?oldid=1853798"
Community content is available under CC-BY-SA unless otherwise noted.