10228 Haunted House is a Monster Fighters set released on September 1, 2012. It includes 2064 pieces, making it the theme's largest set. It is intended for ages 14+. It contains the minifigures Lord Vampyre, Zombie Chef, Vampyre's Bride, two Ghosts, and the Zombie Butler. The Zombie chef and Zombie Butler are exclusive to the set.

The set consists of three parts: the massive mansion, a gate, and the six minifigures.

The Gate is made of two essentially symmetrical sections, joined together. Each is built on a light grey 2X10 brick, and features two raised pillars. The inner one is taller than the outer, and is made of a five-brick high stack of 1X1 bricks, three of which have clips moulded into them. One of the bricks at the top of the pillar features realistic brick moulding. Two of the clipped bricks face outwards, towards the other section, and one faces inward. The outward-facing bricks have attached into them a black gate piece. The two pieces attached to the two halves together form a full gate. The clip brick on the inward-facing section of the pillar has attached into it a different, barred gate piece, which covers the length of the base-brick, until it reaches the second pillar, into which it is attached. For its part, the second pillar is made of just three pieces, a "warped" design 1X2, a 1X2 with clip in it, and a sloped black element. This part of the set is built with Bag #5. 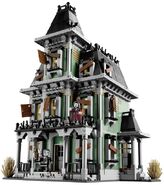 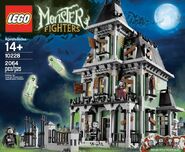 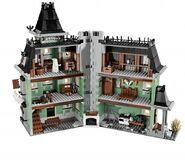 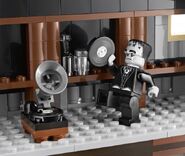