10218 Pet Shop is a LEGO Exclusives Modular Buildings set that was released on May 10, 2011. The set was designed by Jamie Berard.

The set contains two buildings. One is a townhouse (being painted by a painter) and the other part is a pet shop. The set has four minifigures, a green bike, in addition to several animals including two parrots, a German shepherd dog, a new orange fish, a yellow and a grey frog, and a brown cat.

Back view of box 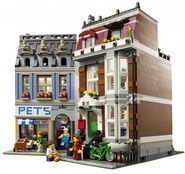 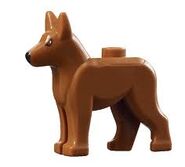 The new dog piece that comes with the set

A picture of all the minifigures from the set 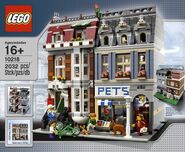 Movie Cameo
Add a photo to this gallery

Retrieved from "https://lego.fandom.com/wiki/10218_Pet_Shop?oldid=1943619"
Community content is available under CC-BY-SA unless otherwise noted.