10144 Sandcrawler is a classic Star Wars Ultimate Collector's Series set released in 2005. A Sandcrawler is a vehicle used by Jawas on Tatooine to scavenge junk, mainly droids, on the Dune Sea to sell later to the civilized people. A remake of the Sandcrawler (75059 Sandcrawler) was made in 2014.

The lowermost level of the sandcrawler is also the smallest, due to its shape. It has a rotating axle which moves a plate via a gear system. Attached to the system is a pair of plates with cylinders. The floor is black with tan plates and the walls are red-brown with some tan, earth-orange and light gray scattered throughout. There are two pairs of arched doorways. On top of the walls are a pair of tall walls with arches at the top. Another set of similar walls is connected to this, with another pair of arches. At the end you will find some different architecture. There are two sets of cylinders, two on each side, a pair of spray can nozzles, and two engines. On top of the arches are a pair or technic beams. On the bottom are a pair of lights.

On the bottom of the sandcrawler are its means of propulsion, treads. These can rotate due to TECHNIC axles connected by a gear system.

Now on top of one of the sections is a plate. It has a few small "domes" and ventilation parts. The front of the sand crawler opens and closes with TECHNIC pins. On either side of the gate is a wall. These open through hinge pieces.

Inside of the sand crawler is a room. The room is gray, black, and earth brown. It has a red light and a green light to indicate whether it's working, a pair of nozzles, a computer, multiple tool holders, and a charger. On top of one charger is a bunch of red lights and it is turned on or off using a switch on the computer. On top of the red/green light is a wheel to turn it on and off. There is a vent on top of which is another switch. The room has no walls. On top is an arch-style architecture and a set of TECHNIC beams. The top of the room is open. It is attached to the roof of the sandcrawler so that it hangs down. A set of slope walls are found on top of the sand crawler. An opening hatch can be found on the top and a piece which has a loop at the top is on it. On top of the room is a cooling grille.

Another section of the sandcrawler is the crane. It has a red light on one side and a green light on the other. There is a small control panel. The crane arm can be pulled in by turning a gear which pulls some string on the end. The crane is on the entrance to the sandcrawler and is used to hoist droids to the second level where they can be disabled, turned back on or repaired.

In Star Wars, Jawas travel across the deserts of Tatooine in their Sandcrawlers to find lost droids, and capture them. They deactivate the droids and disassemble them or repair them, finally selling the droids or scrap to settlements. The Sandcrawler that this set is based on was destroyed by Sandtroopers after they failed to find R2-D2 and C-3PO in it, the droids having been sold to Owen Lars.

Owen Lars and the three Jawas are exclusive to this set. The Sandcrawler also comes with several droids. C-3PO, a Gonk droid, Treadwell Droid, and ASP Droid are included, as well as three Astromech Droids; R1-G4, R2-D2, and R5-D4. 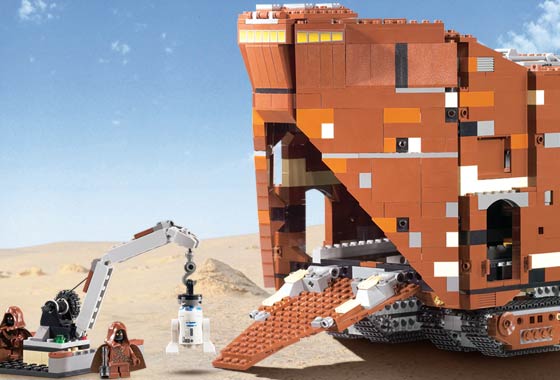 Retrieved from "https://lego.fandom.com/wiki/10144_Sandcrawler?oldid=1851993"
Community content is available under CC-BY-SA unless otherwise noted.